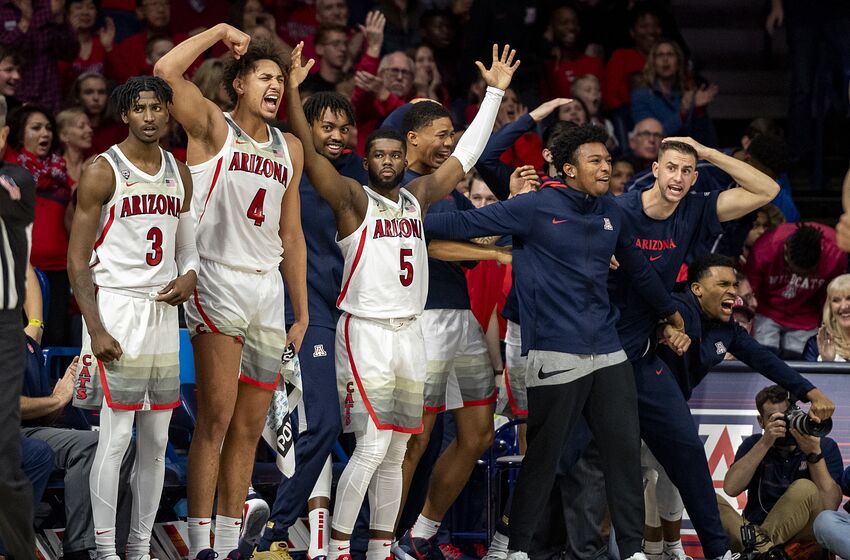 Former Wildcat Earl Mitchell comes out of retirement to play in playoffs by Eric Townsend
Arizona Basketball: Josh Green, an elite defender in the Pac-12 by David Rosen

Arizona Basketball started out the Pac-12 with a punishing 28 point win over in-state rival ASU.

No sweep this year. Last season was a fluke with the ASU Sun Devils sweeping Arizona Basketball. Not this time. The Wildcats were in control right from the beginning in this one as they come away with the 75-47. In front of a sold-out, red-out game inside McKale Center, the Wildcats gave their fans a show.

4. That is the number of three-pointers made in the Wildcats impressive 28 point win. Goes to show that a team in college basketball can win without making a lot of three. They did make 30 of 63 field-goal attempts and shot 50% from the free-throw line.

For the Sun Devils, they did have Romello White back in the lineup after leaving the previous game with a serious ankle sprain. It showed. He wasn’t at 100%, didn’t score a single point, had five rebounds in 24 minutes of play. As a result, the Wildcats dominated the boards 49-35.

After getting out to a 5-0 lead early, the Wildcats went on several runs and went into the locker room with a 36-17 lead. Zeke Nnaji was the leading scorer at the half with 10 points, six rebounds and would end up the leading scorer in this game with 17 points and 11 rebounds.

The Wildcats absolutely dominated the paint in the first half, outscoring the Sun Devils 26-6 and finished with a 50-18 edge in the paint. That type of domination led to them shooting 50% from the field in the first half. Taking better shots, that’s one way to answer your coach’s request.

In the 2nd half, it was all Wildcats. The closest the Sun Devils got was 15 a few minutes into the half. High percentage shooting, continue to control the paint and rebounding led to the Wildcats 75-47 win. The Sun Devils only shot 30.5% from the field, while the Wildcats shot 47.6%.

Besides Zeke, all 10 players that played scored. Josh Green had an all-around solid outing with 12 points, seven rebounds, and two assists. On defense, he was rock solid, making his case on being one of the premier defenders in the Pac-12. Dylan Smith scored 10 points, including two three-pointers, Chase Jeter had six points and rebounds and Nico Mannion finished with 10 points, seven assists and two rebounds.

The supporting players off the bench showed up huge as well, outscoring their opponent 20-17. Christian Koloko led the way with eight points and six rebounds in 11 minutes of play. Stone Gettings also returned in tonight’s game with five points and five rebounds. Getting him back adds much-needed depth to the frontcourt.

The defense was better, shot selection was better and rebounding was better. The question is can they keep the momentum going? We hope so!

At halftime, Sean Miller provided one of his best half time interview performances!

On his team's four missed finger rolls…"At Arizona you gotta dunk it, that's why you come here right, to dunk it?"…Sean Miller is the best!!🤣🤣🤣 pic.twitter.com/2AmsOQdqT8

ASU didn’t have a good game at all and the Wildcats took full advantage of that. Up next for this team will be the top-ranked Oregon Ducks, on the road, who are 1-1 in the conference. This will be a huge game for the Wildcats, for many reasons and hopefully, they can carry the momentum from their ASU win into Eugene. As always, Bear Down, Arizona!