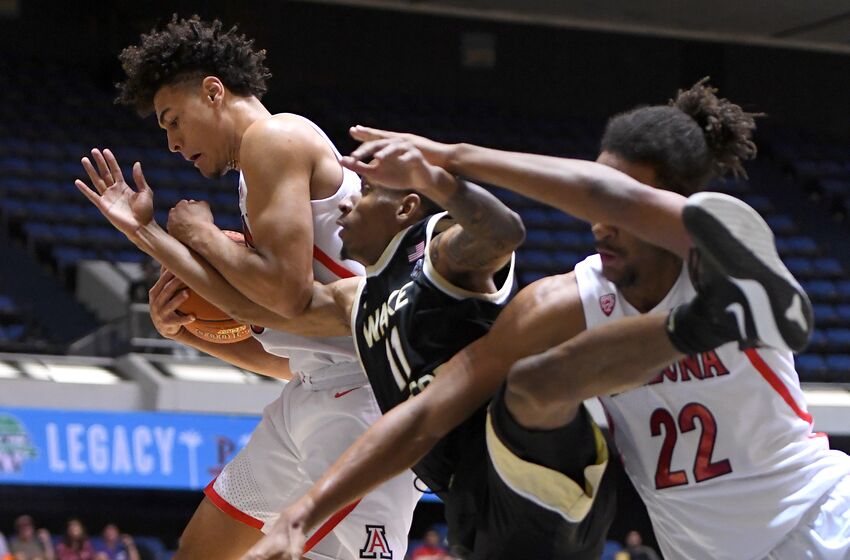 ANAHEIM, CA - DECEMBER 01: Josh Green #0 and Zeke Nnaji #22 of the Arizona Wildcats and Torry Johnson #11 of the Wake Forest Demon Deacons battle for a rebound in the first half of the game during the Wooden Legacy at the Anaheim Convention Center at on December 1, 2019 in Anaheim, California. (Photo by Jayne Kamin-Oncea/Getty Images)

The Arizona Basketball team has a lot of talent, including freshman sensation Josh Green, who is one the elite defenders in the Pac-12. This is why.

Defense wins games. We’ve heard it before and it continues to be one the main things Arizona Basketball head coach Sean Miller instills on his team, defense. Over the years, that has been one of his teams’ downfalls. He has had some elite defenders during his 11 year tenure year, including this year in the form of freshman star Josh Green.

Since the beginning of the season, even during the annual Red and Blue game, Green has stood-out as of the top defenders on this team. I was personally sitting in the front of that scrimmage game and he was locked in on the defensive end, giving 100% effort. As the season has progressed, he has continued to be one of the most consistent players on that end of the court.

There a few reasons why Green has been among the elite defenders, not just on the Wildcats, but in the Pac-12. One of those being his fundamentals. He is always moving his feet, making sure he is in front of his man, whether his opponent is trying to take it down the lane or spot up for a two or three.

On switches too, Green is excellent in communicating with his teammates and making sure the person he is defending doesn’t get a good open shot. Not just his footwork, but his quickness and tenacity on defense make him such a great defender.  One can have the fundamentals, but good footwork, quickness, and tenacity are just as important.

In all 14 games played and started, Green has been averaging 1.7 steals per game, which leads the team. He does also rank No.9 in the Pac-12 in total steals with 24, only five behind Remy Martin of ASU.

Let’s not forget about blocks to. On the season he has a total of six, which is among the top five shot blockers on this team. At 6 foot 6 and 210 pounds, Green can leap with the best of them. This not only helps him soar through the air on dunks, but also swatting the ball away on defense.

On several occasions, this season, a steal by Green has led to an easy transition basket. Defense wins games. Yes, a team needs to get buckets on offense to win but getting easy points off of steals is a bonus. Plus, a steal also gets the crowd into it and also the momentum as well begins to build with a steal and a dunk.

This is gonna be a fun one. 😎@josh_green6 with the feed to @niccolomannion for a pretty bucket to push @APlayersProgram lead early.

Arizona Basketball: Wildcats put a fork in the Sun Devils, win by 28

At Zona Zealots, we believe Josh Green has the talent to be one of the great defenders under Sean Miller. Keep on stealing and dunking that ball, we love it, Josh! As always, Bear Down, Arizona