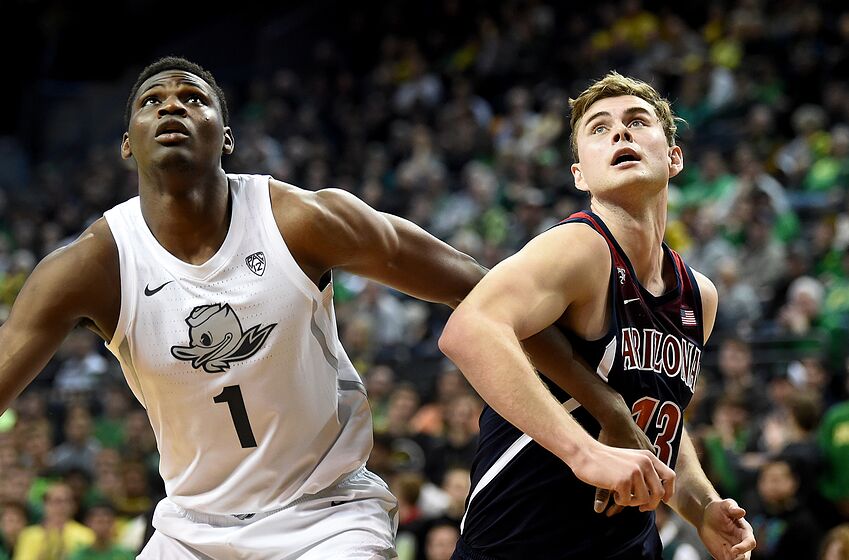 EUGENE, OREGON - JANUARY 09: N'Faly Dante #1 of the Oregon Ducks battles for a rebound with Stone Gettings #13 of the Arizona Wildcats during the second half at Matthew Knight Arena on January 09, 2020 in Eugene, Oregon. Oregon won 74-73. (Photo by Steve Dykes/Getty Images)

Based on how Arizona Basketball has been performing this season, a new starting line up is in order. Here are our recommendations.

Starting five. The 2019-20 Arizona Basketball starting line up has not changed since the season began, but it’s time for one. Not saying the entire starting five should change, but there should be some changes. We’ve mentioned it before, but the time is now for Sean Miller to be decisive and try a new starting five.

Getting the start is every player’s goal prior to the start of the season. With the depth this team has, it has put even more pressure on the starters to perform and to prevent a loss in minutes or even their starting position. In the last few games, the performance of some has put into question whether or not they deserve to be a starter.

Other factors, such as injuries or players transferring having impacted overall playing minutes for the Wildcats. Most recently, the injury to Stone Gettings impacted bench player minutes, but that’s it. Indirectly though, those who have seen increased minutes, as a result, stepped up and have made a case for why they should be a starter.

Two of those players that have made a case to be a starter is Gettings and Christian Koloko. Gettings brings immediate versatility at the forward position. He can knock down the three or two, attacks the glass on both ends of the court and hustles after the 50/50 balls.

Koloko, he brings toughness. His size and strength impact both ends of the court. Blocks, rebounds, easy shots down low, plus he can knock down his free throw shots. When he has been given the opportunity down low to take the shot, he finishes it with authority.

Here is an example of Koloko’s size leading to a block and fast-break dunk for Josh Green. We all know that Miller loves to see his player dunking!

Based on these two players and the current starting five’s performance this season so far, here are our recommendations:

Arizona Basketball: Time for Sean Miller to make some changes

There you have it, lets us know your thoughts. We feel with this new proposed starting line-up, Arizona Basketball can be more efficient and establish their dominance early on in games. Will Miller try a chance it up? Who knows. We think he should! As always, Bear Down, Arizona!